Serves: 2
How much does it cost? This recipe cost me less than £1 per person.
What are the benefits? Thanks to the chillies this recipe is full of antioxidants, as well as being a good source of fibre and suitable for vegetarians.

This isn’t the first time I’ve played around with potato skins (check out my recipe for sweet potato skins with cheese and bacon) but I really enjoy making them – and, more importantly, eating them! 😋

These ones have got a kick with spicy cheese and fresh chillies; they make great antioxidants for the immune system so there’s a good reason for ramping up the heat, but they might be too spicy for those of us with a milder palette. My boyfriend loved them because he’s a sucker for spice but I found them a little eye-watering, so I’d definitely adjust to taste! 🌶

When shopping at my local supermarket (ASDA), I managed to pick up everything I needed for 96p per person, serving up two loaded skins per plate. I thought this was a bargain, especially when I saw how huge and absolutely stuffed to the brim they were when we dished them up!

SEASONING
When you’re mashing together the scooped potato flesh (there has to be a more appealing word than “flesh”, surely…) season with salt and pepper and, if you want an even spicier taste, then you could also throw some dried chilli flakes in there too.

1. Wash and prick the potatoes, then nuke in the microwave. Each potato should take around 7 minutes; keep going until the insides are soft.

2. Scoop out the potato skins and mix the flesh (there’s that word again…) in a bowl with the red onion, chilli, cheese and seasoning until well combined. While this is all coming together, slip the empty skins under the grill to crisp up.

3. When the potato has been mashed in properly with the other ingredients, remove the skins from the grill and load ’em up.

4. Pop the skins, hopefully now full to the brim, back under the grill for another 5 minutes or so, just until the insides are warmed through and the cheese has melted. 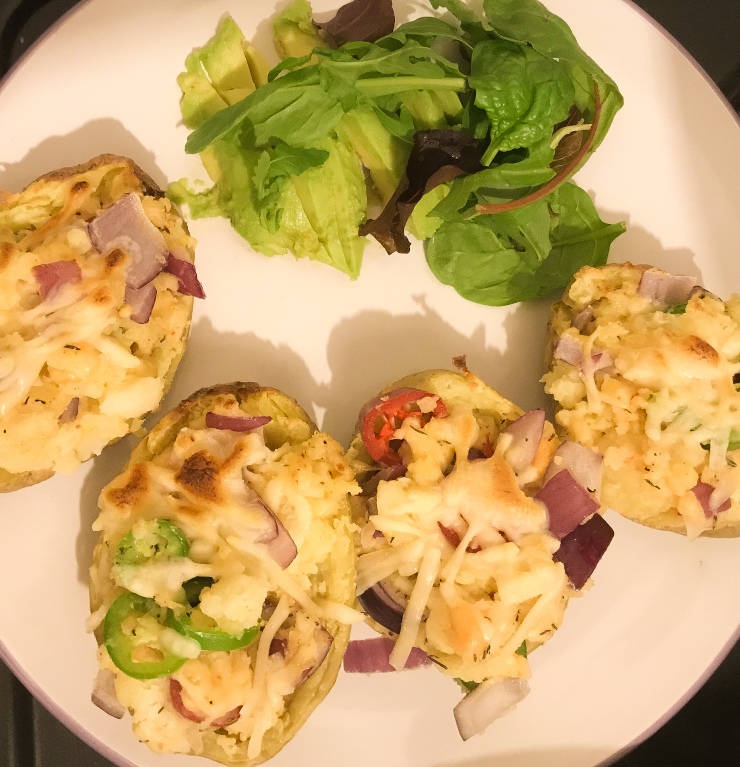